Wilkins Chimney Sweep was established 111 years ago, but there’s nothing 19th Century about its latest franchisee appointment. 23 year old Pierre Goodwin has just completed his training to become the youngest ever member of the Wilkins network, taking on the Guildford territory. Let’s find out what attracted this young, sport mad, mechanical engineering graduate to the world of franchising, business ownership and chimney sweeping. 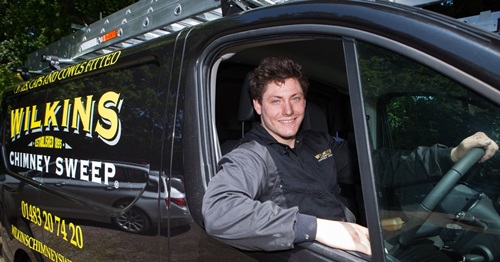 What have you been up to for the last few years that led you down this particular path?

Well, my degree course taught me that I loved University, but that I didn’t want to pursue engineering as a career, much to my parents’ consternation. I’ve watched my friends start to try and climb the corporate ladder in London, and whilst I’m not knocking it, it’s not for me. I’ve had some pretty interesting jobs actually, from waiting tables, gardening, working at a Gin distillery and even considering becoming a full time fitness instructor.”

Investing in a chimney sweep franchise seems the logical next step then?

Why not? My Father has had his own IT Programming business for 35 years. I’ve  therefore always had a good understanding of what it takes to build a company and the kind of hours you need to work to stay successful. The idea of being my own boss has always appealed to me, but to have your own company you have to have your own idea.

I’m pretty confident in my ability to turn my hand to most things and I’m not scared of hard work, but I appreciated that there was a lot about starting a business that I didn’t know. Franchising stood out as an obvious way to start a business with a huge leg up the ladder in terms of initial training, mentoring, and ongoing support.”

I don’t think there are any Gin franchises, but there are plenty of fitness ones. Nothing in that area catch your eye?

Not really, but I have to admit that Wilkins Chimney Sweep may have appeared on my radar in a slightly unusual way. My Girlfriend’s Father, Nick, is a Wilkins Franchisee, in-fact he’s their highest earner and it’s been impossible not to notice just how much he loves what he does every day. 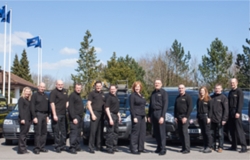 There was no big push from him to consider Wilkins necessarily, but he encouraged me to look into franchising as a serious option and pointed me in the direction of the British Franchise Association website.

I liked the idea that the franchises in membership had been independently assessed and accredited, so to me that felt like a very good place to start, especially given how many franchises there are out there.

Louise Harris (Co Owner of Wilkins Chimney Sweep) is on the bfa board, which again seemed to suggest they were very much committed to the idea of ethical franchising and actively involved in the industry. Combining those perceptions of trust with my conversations with Nick, it really felt like a great option to fully explore.”

What did your friends and family think of the idea of you starting your own business?

They were really supportive and all agreed that it seemed to be a great business model that had enormous potential where I live near Guildford. They know that I’m the sort of person that needs to enjoy what I’m doing if I’m going to be working long hours. Funnily enough, Nick was a fitness instructor before buying his Wilkins franchise, so I suppose my girlfriend might be worried I’m following his career path a little too closely, but she’s really pleased I’ve found something I can throw myself into and make a real success of.”

Presumably there was more to it than just calling Wilkins up and telling them you were going to take the Guildford franchise?

Yes. A lot more. Louise and her husband Peter (the other co-owner) were really approachable and keen to meet with me, but wanted to hear about how much research I had done and how serious I was about coming on board.

It’s easy to miss the point that this is very much a business partnership, whereby the franchisor has to believe in you just as much as you believe in them. Yes, you have to pay for the franchise, but they are investing heavily in you too in terms of training, trusting you with their brand and believing that you will be doing everything you can to grow your business better than someone else could in your territory.

Find out more about the Wilkins Chimney Sweep Franchise by clicking the button below now!