Nick Ménage (52) is married to Gillian, lives in Bloxham and has two children, Jessica and Georgina. Amanda. After 27 years of running a Gym in Banbury he bought his Wilkins Chimney Sweep franchise.

What made you buy a franchise business?

I wanted to start a new business without the stress of starting from scratch. I know what it is like to start a business on your own and at 52 I knew I didn’t want to do that again. I had thought about becoming a maths teacher but realised that a teaching career would end at 55, so would effectively be over before it had begun; I needed a career that I could carry on until I was ready for my pipe and slippers. 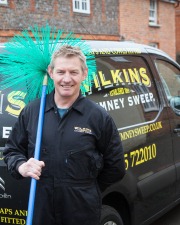 Initially I signed up to a franchise website and started receiving emails from different franchise organisations. I liked the Wilkins offer because I realised that although people can cut their own grass and clean their own ovens they can’t sweep their own chimneys, so I knew I would be providing a truly ‘need not want’ service. I also spoke to a friend of mine who’s a fireman; he explained to me how frequent and dangerous chimney fires can be and that a chimney sweep provides a vital safety service to the public. Combined with the strong branding it made the decision quite easy.

After doing a sports science degree my wife and I bought a health & fitness club in Banbury and ran it for 27 years. It was a large premises with 10 members of staff and 1,000 members. We estimate that over the years we must have seen over 10,000 people come through the doors so I think it’s safe to say I know a bit about customer service!

Have you done your training with Wilkins Chimney Sweep? If so how did you find it and what did you learn?

Yes, I’ve completed my training now and thoroughly enjoyed it. I’ve also learnt that there is more to sweeping than meets the eye. Peter makes it look so easy.

What skills do you think you need to be a chimney sweep?

I think you have to be able to adapt, think logically and methodically. No two chimneys are the same and although they look straight from the outside, some of them are far from straight inside!

What skills do you think you need to run a franchised business?

My previous business skills are helpful but when you are running a franchise business keeping to the model is essential because the model works.

What are you enjoying about running your own business?

It’s great being my own boss again but this time it’s with a supportive framework. I know what it’s like to be in business on your own and this is quite different; it’s great to have Peter and Louise there, at the end of the phone or an email, when I need support and advice, or even just to say hello.

What support have you received from your franchisor?

Loads! I spent a week with Louise going through the ‘office’ side of the business, setting me up on the booking system, the accounts package etc. Obviously having run my own business I had a pretty good idea of what was needed but there were one of two bits that were new and specific to Wilkins.

The next week I spent with Peter. First we did theoretical training then I went out and about with Peter in the van, learning on the job, the only way to do it. Finally we did cages, caps and cowls, learning to climb a ladder safely and to fit these important pieces of chimney equipment.

I plan to develop my customer base as much as possible. I’m going to be using the marketing package suggested by the franchisor and trying to develop a few ideas of my own. Things are going well so far; I’ve had some challenging chimneys but none have beaten me yet!