Mark Frost was the first ever Wilkins Chimney Sweep franchisee and bought his business in June 2011 having previously worked as a Commercial Valuation Surveyor. Mark is married to Sue and has two sons, Nicholas and Simon. 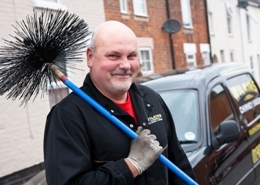 18 months after purchasing your Wilkins Chimney Sweep franchise how is your new business going?

On the whole things are going well. Being the first person to ever buy a Wilkins franchise I didn’t have any idea of what to expect as there were no other franchisees to base my research on. I knew Peter and Louise ran a successful business in Newbury but had no real idea if it would work for me so yes, I suppose I’m pleasantly surprised that it is all going well!

Did you have any concerns about buying a franchised business in the beginning and, if so, what were those fears and have they been alleviated?

My real fear was not about buying a franchised business but about buying a chimney sweeping business. I just worried, ‘will this work in Brighton and Worthing’ and on that front my fears were unfounded.

In just 18 months I now have over 900 customers which, if you had told me 18 months ago I probably wouldn’t have believed you. Even with all my research, I hadn’t realised that there was quite such a demand for chimney sweeps.

I’m delighted to report that growing numbers of people are using open fires and wood burners to heat their homes; it seems that every week I’m being called out to advise people if the fire place they’ve just opened up is safe to use. After a thorough sweep it usually is which great news is for me and them.

What have you learnt about yourself in that time?

Mainly that despite having spent most of my adult life sat behind a desk that I’m really quite good at manual labour! No two chimneys are the same; some bend and twist, some have blockages of bricks, dead birds or nests and all present their own challenges. Also, unlike a lot of sweeps in my area I do cowl work which entails climbing up onto roofs and fixing a cowl to the top of the chimney pot to stop birds nesting. It took me a bit of time to become confident on the ladders and you certainly have to keep your wits about you! It also means I pick up work from other sweeps who don’t do roof work, which is always nice!

Is there anything you wish you had understood better about the job that maybe surprised you a few months in?

Yes, initially I was surprised how seasonal the work is. Although Peter and Louise did explain that fully to me when I bought my business I think you have to ‘live it’ to really understand it. During my busy season I am working flat out, doing as many chimneys as I physically can in a day but then things quieten down. However, the way our model is put together we have ways of boosting business in the quieter periods and 18 months in I’m definitely reaping the rewards of this method.

Is there anything about your new business that has surprised you?

Yes....people are really nice! Going from a desk job where most of my communication was done on the phone or via email it has been great to meet hundreds of new people face to face and to find out that the majority of them are really nice people. Half the time I’m offered a cup of tea and we have a little chat; I try to make time to stay if the person is elderly or lives alone, sometimes I think they appreciate having someone to talk to. I think being Police Checked and having that on all our marketing material really helps bring peace of mind to people when they let you into their homes.

Have your franchisors been as good 18 months on the day you handed over your cheque?

Absolutely; I still speak to Louise regarding admin issues about once a fortnight and I’ll give Peter a call if I come across a more practical, sweeping problem. Sometimes I’ll take a photo and email it to him asking for his advice. We also discuss best practice throughout the franchise; recently we decided to investigate equipment which resulted directly from discussing it with Peter and deciding which product best suited all our needs. I also receive weekly emails from Louise that she sends to the entire franchise group, updating us on information she feels we need to know. I’m 100% happy with my franchisors.

What about on-going training?

Part of my franchise fee included becoming HETAS approved and a member of APICS. I attended and passed the HETAS course last summer and really benefitted from what I learned there. I also completed the APICS assessment and am now a full member.

If you were to give advice to someone else thinking of buying a Wilkins Chimney Sweep franchise today, what advice would you give them?

I’d say go for it but only once you’ve done your research. When I set up I didn’t do an extensive business plan, although I did do a certain amount of local due diligence; franchisees joining Wilkins today have to complete a much more extensive business plan (in part as a result of my experience as their first franchisee), which looks at a number of indicators, such as the quality of the local competition and what services you might offer that they don’t i.e. caps and cowls etc. It’s important to decide whether your offering is sufficient to compete in the local market.

One of the other things that I hadn’t really considered was the high churn of people moving into and out of rented accommodation in my area (Brighton and Worthing). However, recognising this issue, Peter and Louise worked with me to develop a more appropriate marketing plan, so that the property now stays on my radar even when the tenants change.

Being the first franchisee, I was glad to be able to help Peter and Louise develop the model for future franchisees; probably the key learning point was to look closely at the local market and build a marketing plan that ensures my share of the local sweeping business keeps growing.