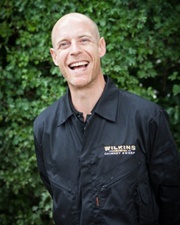 Jon has lived in Newbury since he was 16 having previously lived in various places around the country (and abroad) as a forces child. He moved from an analyst role with local employer, Vodafone, where he’d worked since 2005 (with a brief break!). He has also worked for A-Plan Insurance and the AA and was a corporate man until he decided to take a step back from the computer.

Jon’s desire to work more closely with customers, eliminate the daily grind of a desk job, be more practical and generally shift his lifestyle to a less stressful environment, were all on his mind when he applied for a job as 'Service Associate' with Wilkins Chimney Sweep. He was very interested but he was especially enthused when he learned that there may be an opportunity to own the business!

The Newbury territory was where Wilkins Chimney Sweep began and buying the business of course meant inheriting an impressive history and heritage – and the business was brought into the franchise team. It will still serve as a base for new franchisee training and innovation for the model.

Jon’s role, working for Wilkins Chimney Sweep, gave him far more opportunities to indulge in his cross-country mountain biking and general fitness. And he doesn’t plan for much to change in that regard. Jon has an employee, Matt Crockford, who has been in the business for a year and will support him alongside Peter Harris – Managing Director of Wilkins Chimney Sweep Limited (the franchise head office) will keep his hand in with sweeping as required whilst still training new franchisees.

Of his new career Jon says:
"Starting with Wilkins has ticked all the boxes in terms of what I was looking for in a job. I have moved away from working behind a desk, I get too meet new people, go to new places and no two days are the same. I now have the additional bonus of being my own boss. I couldn't be happier and am looking forward to the challenge ahead.”

Peter Harris, Managing Director of Wilkins Chimney Sweep Limited said:
"Jon has been a great asset to the business since joining us in 2013. Our customers really like him – he has a great smile and infectious energy. I knew we had a winning team when people stopped asking for me and insisting that Jon came back…"

Louise, Franchise Director of Wilkins Chimney Sweep Limited, commented:
"We knew Jon was a candidate to be more than an employee from the date he joined us. We’re thrilled that it’s worked out so well. We know he’ll do a great job and knows we’ll help him get there."

Want to know more about the Wilkins Chimney Sweep franchise? Click below