Adrian Steel (30), has recently launched Wilkins Chimney Sweep (North Hants). He is married to Hayley and lives in Basingstoke, Hampshire

What made you buy a franchise business?

"If I was going to start my own business I wanted to hit the ground running and the business model that Wilkins Chimney Sweep offered has allowed me to do just that. If I’d started on my own this wouldn’t have been possible. By buying into the franchise I have been able to learn a new trade and start up in totally new industry to me." 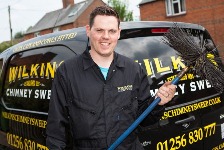 that they were both hard working and honest people. This combination really appealed to me as I know they are striving to build the Wilkins brand, which can only benefit my business. Even though I looked at other franchise operations I didn’t get the same feeling from any of the others."

"Also, the Wilkins model is based on repeat bookings from customers and has a very low debt level which, in the current financial climate, really appealed to me."

"A big bonus for me was the fact that Peter and Louise’s territory is neighbouring my own and I knew that as they’re already very established in their territory I would benefit from spin-off work immediately. It also means that if I need help I know they’re close by"

What did you do before you bought your franchise?

"I graduated from Leeds University in 2005 with a BA (Hons) in Accounting & Finance. After my graduation I moved into sales (new business) and then invested in a bird and pest control franchise in 2008. In 2011 I sold my franchise and went back into sales (account management) but I always knew I wanted to run my own business again, so I began research into a suitable business."

"No my previous role was a sales representative. Whilst I enjoyed the role I was constantly aware that I wanted a new challenge away from sales as well as the opportunity to be my own boss. After lots of research regarding the different franchises available I discovered Wilkins Chimney Sweep and decided that I wanted to be part of the team."

Have you done your training with Wilkins Chimney Sweep? If so how did you find it and what did you learn?

"Yes, I’ve just finished all my training, both the admin training with Louise and the practical training with Peter. On the admin side I have taken to it pretty well I think. I have found the database/booking system very easy to use and the accounting software is also relatively straight forward, although my degree in accounting has probably given me a slight advantage! I’ve been very impressed with the ideas and techniques that Wilkins Chimney Sweep use to service and maintain their customers and I have no doubt this will help me to build a successful and sustainable business."

"The practical training has been quite a challenge. I had no idea how much physical effort it would take to sweep a chimney. Peter makes it look easy but when I’m sweeping it’s blooming hard work!  Having said that, sweeping is great fun and the interaction you get with your customers is great."

What skills do you think you need to be a chimney sweep?

"I’d say you need to be physically fit and have a good head for heights. You also need to be patient and have the ability to think things through, as not all chimneys are easy to sweep. An ability to build a good rapport with your customers and honesty are a must."

What skills do you think you need to run a franchised business?

"You need to put your faith in the franchisor and take their advice, after all they’ve been successful with the model and you’d be foolish not to take their advice. I’d also say you need to be driven to make your own business a success as just buying into the franchise isn’t enough. You need to be level-headed and able to listen to people, it’s important to be able to take a step back and see where you might be going wrong, and you need to have a passion for the business and be able to draw on any experiences you’ve had in any previous jobs."

"My plan is to work as hard as I can in the next year both in terms of sweeping and in promoting the Wilkins Chimney Sweep brand in my territory and  I’ll  continue to work with Peter and Louise to ensure I take full advantage in my first year of trading as a Wilkins Chimney Sweep."

What are you looking forward to about running your own business?

"I am really looking forward to the freedom that I get when I run my own business. I know I am going to be a lot busier than in my last job but it’s so great to know that all of that effort will be rewarding me and not someone else! I’m also looking forward to meeting new people every day and providing them with a great service, so that hopefully, they’ll come back to use my services next year."

What support have you received from your franchisor?

"I have finished my training with Peter and Louise now and it is worth saying that it has all been one to one, which I know is unique compared to other franchise operations. The advice they’ve given me has been great and they’ve both made me feel very confident about starting off in my new venture. I also know that they’re only a phone call away if I need support or in my case only a short van ride away as well."

To find out more information about WILKINS CHIMNEY SWEEP, Van Based Cleaning Franchise click below