UK Franchises For Sale and Franchise Business Opportunities
All Franchise Categories  »  Property Franchises  »  Agency Express  »  Casestudies
Agency Express Case Study
John Burke has grown his Agency Express business and moved from a single van operation to multiple vans and in 2016 and when a favourable resale opportunity became available he purchased his second territory.

John Burke has run a successful Agency Express franchise since 2004. Previous to this he had worked for 15 years as a long-distance lorry driver, which meant spending long hours away from home. This was the driving factor in wanting to change his career and become his own boss. 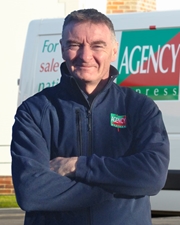 "It was a great opportunity for a home-based business. I was also attracted by the fact that no previous experience or qualifications were necessary, as the training course in Norwich covered all areas of the business."

John successfully completed the Agency Express five day training course which was then followed by three days of supported visits to estate agent in his territory, as part of his business launch. He put his training in to action straight away and can-do attitude helped him easily win business from estate agents across Colchester.

"The business quickly grew to a point where I working at full capacity with one van. I really enjoyed the freedom of being able to choose the hours I worked, and I particularly appreciated being able to work from home."

Over the last 13 years John has grown his business exponentially. He has moved from a single van operation to multiple vans and in 2016, when a favourable resale opportunity became available he purchased his second territory.

The support is still fantastic and you are never left alone when you need help. There is always someone on the other end of the phone to assist with whatever the problem may be. Agency Express staff are more like friends and family that you can just ring for a chat and that is a rare benefit other companies do not have.Danny James, Agency Express Teesside