UK Franchises For Sale and Franchise Business Opportunities
All Franchise Categories  »  Property Franchises  »  Agency Express  »  Casestudies
Agency Express Case Study
After much research Paul Jenkinson made the decision to pursue a career in franchising and choose the Agency Express franchise opportunity as the most suitable route to take. 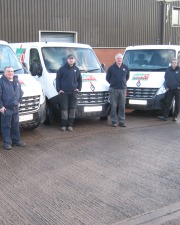 Previously a facilities maintenance engineer wanted to take control of his own future and set his sights on being his own boss.

After much research via a number of franchise magazines, Paul made the decision to pursue a career in franchising and choose the Agency Express franchise opportunity as the most suitable route to take.

"I looked at other franchise possibilities but Agency Express appealed to me because of its reputation and the billing support that they offered. I also prefer to work outdoors so Agency Express seemed to suit me perfectly."

After successfully completing the Agency Express five day training programme Paul was guided through a three day comprehensive handover and given support to re-launch the business under his new ownership.

"As I bought an existing franchise business I had to hit the ground running. The first three months were extremely challenging but were an excellent learning curve. It was also great that Agency Express were on hand to answer questions and support me if I needed it."

Paul thrived within the first 11 months. He grew the business from strength to strength and successfully launched two additional vans to further cover his territory.

"My experience so far has been very fulfilling. My days are always interesting and challenging, never boring, they are always stimulating and busy! Since buying the franchise I have employed two more people. I now have three vans on the road, two full time employees, two part time as well as myself. My team comprises of me, Igor, Steve, David, Helen and my partner June. Today the business continues to grow but within the first 11 months our turnover had increased by 30%."

Key to Paul’s success has been his drive to further grow the business and to deliver excellent services. He has demonstrated that there is always room for growth and improvements even in successful established franchise businesses.