Ruth Morris, owner of The Creation Station Aberdeen and winner of the Best New Franchisee 2014, shares her story of her first year running her own successful business.

Running my own Creation Station franchise fills me with confidence, excitement, ambition and satisfaction. 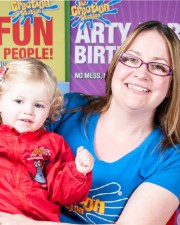 What began as an ambition to launch a small, flexible family-friendly initiative has become in only ten months an all-encompassing roller-coaster of ever increasing highlights.

I was seeking a new direction far flung from the local authority environment I was engaged in. Whilst in employment my children were in wrap around childcare for a decade and for me personally the financial rewards could never compensate for me not having time with my children.

Running my own Creation Station franchise has provided me with the opportunity to have the flexibility I want, to work with children and support families and to be creative, as well as being my own boss an benefiting from my own hard work.

I was awarded my Creation Station franchise in March 2013 and immediately began marketing and securing my first venues. Within a couple of weeks of completing training I delivered eight Easter launch events and as word spread I launched with six weekly Little Explorer and Baby Discover classes. Word kept spreading! So during the summer I provided forty four Family Fun holiday sessions, leading to the launch of a further three new classes in my second term. In the nine months from April-December 2013 I provided 252 classes for 2,474 individual child spaces, far exceeding all my expectations.

In terms of business growth I dreamed of working with 50 children weekly by my first summer, I imagined 75 children in my second term and believed it was pie in the sky to support 100 children in my third term. However the actuals have been much higher than my initial business plan. In January 2014 I was ecstatic to book 110 spaces in advance of classes, realising that dreams can really come true.

From the moment I was awarded my franchise I have marketed my business, implementing the top tips and ideas from Head office and the network as a whole. This includes Facebook, leaflets, posters and launch events, but the most powerful tool has been word of mouth recommendations. I encourage my families to share their experiences. Their enthusiasm is building my business, fueling my vision for the future and confirming every day that I have best career in the world as I‘m helping to inspire children’s imaginations and running my own successful creative business.

But what about my work/life balance? Have I lost sight of my original drive to seek a new better path? Far from it. In those first nine months I enjoyed three months of holidays, relished an entire summer with my children, and developed new friendships for whom I previously overlooked, moved home and used my earnings to furnish our new farmhouse. I have held my daughter’s hand as she started school and have stood in the playground when the bell rings at 3:15 every day. And all of this only possible because of my Creation Station franchise.

The future is rosy; I am recruiting party and seasonal staff, developing new venues, building partnerships & engaging with charities. Running my own Creation Station franchise fills me with confidence, excitement, ambition and satisfaction. Every goal I set and achieve reinforces my growing retaliation I am a professional, creative businesswoman capable of having the ultimate career whilst providing a loving & secure family life for those most important to me; Lexie, 5, Connor 11 and my biggest supporter, my husband Steve.

Do you want a thriving professional career where you can achieve the flexibility you want and benefit from you own hard work? Would you like to know more about The Creation Station? Simply click below

Katie is running her Creation Station classes in Renfrewshire as she wanted to improve her quality of life.

Lyn runs her Creation Station classes in Watford and Rickmansworth

Deirdre Brings Her Passion For Creativity To Chesterfield

Deirdre has recently joined The Creation Station and now runs art and craft classes for all ages in Chesterfield.

Meet Tracy the new 'Head Of Inspiration' at The Creation Station Yarm.

Reshma was a chartered accountant who had a dream of being self-employed so she started a Creation Station franchise in Eastbourne.

Celebrating Success With Hayley From The Creation Station Swindon South

Hayley's passion to achieve a flexible work balance and encourage children to ask questions and solve problems creatively has led her to an exciting new career!

Passion And Perseverance Brought Award-Winning Parties To Lancaster And Kendal

From Mermaid To Award-Winning Parties In Brighton and Hove

Abby Newall is Inspiring Minds in Chichester and Arundel

Louise was looking for a new challenge and the freedom that flexibility could bring to her working life.

Sarah is inspiring the children and adults of Bury North with classes, parties, events, and more!

Chantal Craig is Inspiring Minds in Hitchin And Letchworth

Vanessa Whitehouse Is Making A Difference

Creative Children's Classes and Crafting in Coventry West with Vicky!

Emma McCalla-John Dreamed Of Being Her Own Boss

Emma McCalla-John invested her twenty years of expertise in teaching music into her dream of being her own boss.

Lisa Hagg tells us about her six years with her Creation Station franchise and her highlights from 2016 so far.

Thinking about changing your career for something more rewarding and flexible?

Find out how Cathy Huston changed career and now runs her own Creation Station business in Preston.

Sarah Cressall talks about the opportunities that The Creation Station has to offer.

Sara le Roux gives 10 insider tips that you need to know about running a franchise!

The Creation Station are pleased to introduce Shobhana Sankar

Shobhana Sankar inspires imaginations with The Creation Station in Surrey.

The Creation Station are pleased to introduce Tracy Hull

Tracy Hull who runs her Creation Station business in Basingstoke says "I live being a role model to my children.....".

Introducing Kirsty Hickson the owner of The Creation Station in Driffield

Kirsty Hickson says that running her own successful Creation Station business has been the making of her.

Sarah Finan has taken control of her working life and now inspires children's imaginations with her own Creation Station business.

Liz Cairns passes on her reasons for joing the The Creation Station.

Karen Carnsen says that The Creation Station has given her the confidence to be her own boss and she is very positive about the future.

I wanted to have the freedom of choosing my work hours to fit around family life. I knew I wanted to work with children and be my own boss.

Running my own franchise with a nationwide brand that shared my family and personal values was the obvious choice for me.

Jackie wanted to ensure she had time with her pre-school children but wanted to steadily build a rewarding business that could grow further when they started school.

Lucy wanted to give something back to her community and found the values of The Creation Station could help her achieve a fulfilling and rewarding business opportunity.

Following the birth of her twins, Hayley Sugden wanted to go back to work and The Creation Station franchise provided everything she wanted.

Who wouldn't love the flexibility of this business! I have been running my franchise for just over four years now and I can honestly say it has ticked all of the boxes I had set down from the beginning with making sure the work/life balance fit in around my family.Penny Gilbert

I've been running my own Creation Station franchise since the end of last year and love it! The head office team are fantastic and the support and advice I've received from them has been invaluable.Kirsty Hickson

I have been running my Creation Station franchise since March 2013 and I can honestly say they have been the most fun filled happy months in employment I have ever had.Kirsty Hickson

You can run your own flexible business and help inspire children's imaginations with the UK’s leading art & crafts activity company, Us!

Perfectly designed for a Mum who wants a family friendly financially rewarding future.

The UK’s #1 #kitchen #makeover company has trained new #franchisees this year and they have all gone on to make… t.co/cY3j9xZAyY