Kris McLernon, owner of the Lanarkshire franchise of Wilkins Chimney Sweep, was a winner at the 2022 Scottish Ex-Forces in Business Awards recently, in the ‘New Service Leaver’ category.

The New Service Leaver category recognises men and women who left the military less than three years ago. Kris left the army in April 2020 after 14 years as a recovery mechanic with the Royal Electrical and Mechanical Engineers (REME) and bought his Wilkins Chimney Sweep franchise in September 2021.

At a black-tie event held at the Hilton Hotel in Glasgow, Kris was announced as the winner of his category and presented with his award by Lt Col Lorne Campbell, Edinburgh Garrison Commander and ex Royal Marine, BBC presenter and Invictus Games Gold Medallist, JJ Chalmers.

Lt Col Lorne Campbell said:
“I was honoured to present Kris the award for New Service Leaver at the Scottish Ex-Forces in Business Awards recently. Against very strong competition, a panel of experts recognised him as the standout winner. I'm not familiar with his business or sweeping skills, but I would be willing to lay a wager that he is probably quite brilliant. Many congratulations Kris.”

The awards highlight the achievements of ex-military personnel, their success since leaving the forces and the organisations that have supported them.

The organisers said:
“Every finalist was an outstanding role model for service leavers new and old, and a tremendous representation of the synergies between military values and business excellence.” 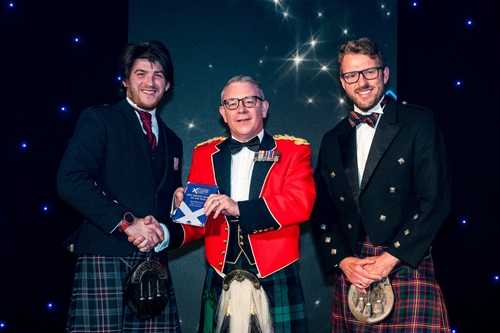 Kris bought his Wilkins Chimney Sweep franchise on a ‘no money down’ special offer that the franchisor, Taylor Made Franchising, developed during the pandemic to help people looking for a new career. After less than 12 months Kris has exceeded all expectations and has leapt to halfway up the franchisee’s leader board, beating many long-established franchisees. He has used creative marketing and advertising to boost his brand awareness and is a keen social media user, frequently posting videos of his day and the chimneys he is cleaning.

Corps Colonel, Colonel Jason Phillips ADC REME said:
“On behalf of all members of the Corps of Royal Electrical and Mechanical Engineers (REME) we are absolutely delighted to see Kris win the Scottish Ex-Forces Service Leaver of the Year Award for 2022.  Kris epitomises all that is great about former and current REME people – bright, hard-working, honourable and with a can-do spirit to everything he takes on.  Huge congratulations Kris.  Well done.”

Talking about his win Kris said:
“I genuinely thought it was just going to be a night off, to let off some steam and meet a few good people. I managed not only to have a great night but I also won the award in my category.  Massive congratulations to all the finalists and winners. If someone like me can achieve something like this, there’s absolutely no reason why no one else leaving the military can’t achieve the same and I did it all through a pandemic.  Have faith in your abilities troops. Your hard work and diligence doesn’t go unnoticed.”

Pip Wilkins, CEO of the British Franchise Association said:
“The franchising model can be an excellent choice for anyone leaving the military to consider as a way to build a second career. The bfa is delighted that Kris McLernon's hard work as a Wilkins Chimney Sweep franchisee has now been rewarded with this award win."

Wilkins Chimney Sweep is owned by Taylor Made Franchising  and discounts are available for ex-military personnel.

Find out more about starting your own Wilkins Chimney Sweep Franchise by clicking below now!

Following a two-year break, due to the Covid pandemic, Wilkins Chimney Sweep held their annual franchisee conference in Birmingham.