Wilkins Chimney Sweep has a new franchisee who purchased his franchise during the COVID pandemic.

Keiron Harding (42) has launched Wilkins Chimney Sweep (Isle of Thanet) and will be sweeping chimneys for open fires, wood burning stoves, Rayburns and Agas as well as fitting cages, caps and cowls and removing bird’s nests from homes and businesses across his East Kent territory.

Keiron lives in Ramsgate with partner Jane and has three children, Layla six and twins Megan and Louis two. 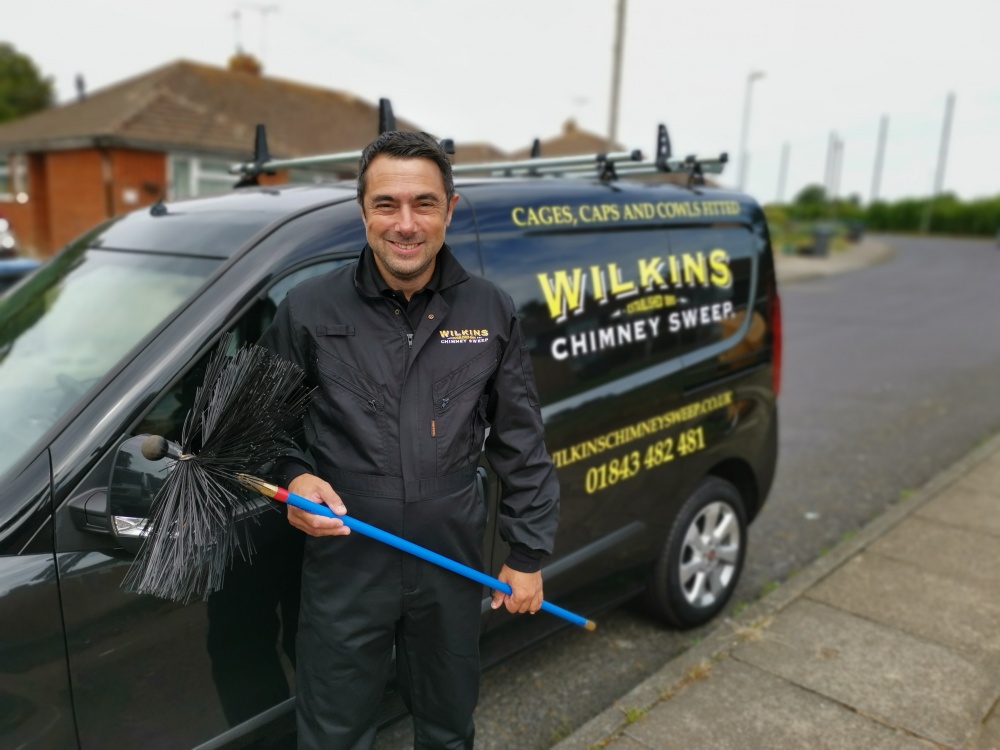 Before buying his Wilkins Chimney Sweep franchise, he worked at a specialist children’s school in Kent.

‘I was offered the chance to go back to the school but I know it would have been impossible to keep 2m away from the kids and I’ve got a young family to think of, so I handed in my notice. I also wanted something that gave me more control over my own time and my family’s future. I’d looked at franchises before but had always been sceptical. I started googling ‘Low Cost Franchises UK’ and found Wilkins on one of the franchise websites.’

After initially making contact, Keiron was delighted to hear Wilkins were offering a ‘No Money Down’ scheme, meaning he could be up and running in no time without having to worry about repaying the franchise fee until September 2021.

Like many people who express an interest in becoming a chimney sweep, Keiron was on the receiving end of more than one or two raised eyebrows when he discussed the idea with friends and family;

‘I had loads of people saying ‘what do you want to do that for, no one uses chimney sweeps anymore’ but that’s exactly where they are wrong. The art of sweeping chimneys may be ancient but the fires that start in an unswept chimney or the Carbon Monoxide that kills a sleeping family because of a blocked flue are very much a 2020 problem and I’m proud to be providing a safety service to my local area.’

‘I looked at lots of different franchise opportunities, oven cleaning, house cleaning, gardening etc but I knew I wanted to do something that the average home-owner couldn’t do for themselves, making it recession proof. You can’t service your own car or boiler, neither can you sweep your own chimney.’

‘We are delighted to welcome Keiron on board and we know he is going to make a great sweep. He has already spent three weeks on-site training with our franchisees, sweeping just shy of 100 chimneys. To be a good chimney sweep you need to be physically fit and to have a good problem solving attitude; to be a good Wilkins Chimney Sweep you also have to be able to follow the Wilkins model and have a desire to build your own successful business.’

On the risks of starting up a new business Keiron said,

‘Of course I’m apprehensive, it’s a new job, who wouldn’t be, but I’m equally confident that I’ll succeed.  I have received great support from everyone at Wilkins; I’m already in the franchisee’s Whatsapp group which is so useful for asking questions in these early days.’

Chimney Sweeping is a debt-free, pay on the day business model; Wilkins have developed bespoke mobile software that processes a sweep’s invoices, sends out the Certificate of Sweeping, and reminds clients of their next sweep, all via a mobile phone or tablet, saving them hours of administration time.

Darren Taylor, MD of Taylor Made Franchising who own Wilkins Chimney Sweep said,

‘So many people have had their lives turned upside because of COVID and like Keiron, many of them are looking for a new path, either because of redundancy, losing their jobs or simply because they want more control over their health and safety at work like Keiron.

At Taylor Made Franchising we have a variety of ‘man in a van’ type operations which would appeal to anyone who is looking for that next career move.  Franchisees can be assured that they have a hugely experienced team at head office here to support them; we’ve helped many people build their own successful franchise businesses over the years. I was a Stumpbusters franchisee myself, so know exactly what it is like to be out there every day, in all weathers working hard to build up a business. These are tough times and we genuinely more people will follow Keiron’s example and come and look at a Taylor Made Franchising business to help them get back on their feet and earning money again.’

Find out more about the Wilkins Chimney Sweep Franchise opportunity by clicking below now!

Wilkins Chimney Sweep has recorded its most successful month of sweeping and income since records began.