Franchise Business Opportunities and UK Franchises For Sale
All Franchise Categories  »  Vehicle Paint and Panel Restoration Franchises  »  Revive!  »  News
Revive! News
Revive! franchisees gathered to attend the company’s 16th annual conference and celebrate a year which has placed the UK’s leading network of accredited SMART repairers well on track to meet its stated goal of achieving a £20m turnover by 2020.

Revive! franchisees and technicians from all over the UK gathered once again at the home of England football, St James Park to attend the company’s 16th annual conference and celebrate a year which has placed the UK’s leading network of accredited SMART repairers well on track to meet its stated goal of achieving a £20m turnover by 2020.

The theme of this year’s conference was ‘Mindset for Growth’.  Board directors Mark Llewellyn, Terry Mullen, and Kelly Blackmore-Lee  presented the highlights of the year which included a 10% growth in network sales, 40% rise in  national account business, two new franchisees, the largest ever territory re-sale  and outstanding customer feedback through Trustpilot. Over 98% of all Trustpilot reviewers gave Revive! a 5* or 4* rating. The business was also awarded a rare Gold rating after its 2019 IIP re-assessment.  Only 20% of those assessed achieve this high standard.

The conference also heard that franchise director Cathryn Hayes has been named as one of the most influential women in franchising for 2019 and joint managing director Terry Mullen was named by the Auto Body Professionals Club as one of their 40 Women of Influence, as well as being a finalist in the 2019 Encouraging Women in Franchising (EWIF)  Awards.

In announcing that the new company goal was to double turnover to £40m by 2025, managing director Mark Llewellyn said:

"I’m delighted to report another record year at Revive!, with multiple records smashed and the business continues to grow year on year at a significant rate.

I would like to congratulate also all those individual businesses that created new records and the accelerated growth group  group that has tripled in size since its inception in 2018.

Growth has been a key focus for Revive! and even under challenging economic times I am delighted to have seen that the reputation of quality in both workmanship and customer service have enabled the Revive! network to experience another outstanding year in 2019.”

The company now has 60 franchisees, with 190 technicians on the road, all supported by a 50-people strong Rugby based head office team. 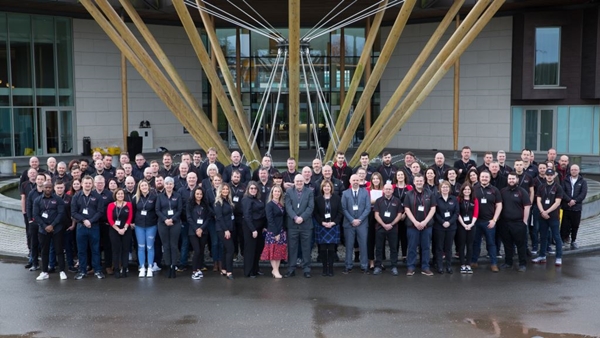 It’s a tradition at the Revive! annual conference to  host industry leading  and inspirational speakers to motivate delegates, and this year was no exception.

The keynote speaker was Jason Todd from specialist training, motivational and development company Art of Brilliance who spoke on ‘be yourself’.  Callum Wood, CitNow and Trevor Ferris  from Eco repair Systems updated delegates on latest industry developments in video and repair techniques whilst Chris Cook and Mike Brocklebank from franchise recruitment specialist Chantry underlined the importance of planning for business growth and devising an  exit strategy.

After lunch six long service awards and 19 best month awards were presented  to the network and a question and answer session with Revive! sponsored BTCC racing driver Andrew Jordan brought the conference to a close.

More outstanding individual and team achievements were recognised at the post-conference gala dinner and awards ceremony which also raised £1,300 for the Motor Neurone Disease Society.

In a brand-new award for 2019, the owner of Revive Edinburgh Jonny Pearson was Highly Commended for achieving outstanding business growth in a short period of time since taking on the territory.

Find out more about franchise opportunities with Revive! by clicking below

Revive! up for Highest Industry Award

Revive! is delighted to announce that it is one of just six brands singled out to take the top accolade in this year’s British Franchise Awards.

The fact that head office does the accounts and administration for me is really helpful. Also Revive! has a national website where I get a lot of my leads from.Dan Normanton

Having worked with the Revive! team for a little time now, it is great to know that there is always someone at the end of the phone to help with technical support or just general advice of how to continue developing my business.

Revive! are the first company in the Smart Repair sector to implement the use of Water Based paints ahead of legislation that will restrict the use of environmentally damaging solvent based paints.

Revive are the first full member of the British Franchise Association in their industry sector.

The Revive! Directors have many years experience in the Smart Repair sector and two of the Directors run their own highly successful Revive! franchises.

The UK’s #1 #kitchen #makeover company has trained new #franchisees this year and they have all gone on to make… t.co/cY3j9xZAyY