UK Franchises For Sale and Franchise Business Opportunities
All Franchise Categories  »  Auto Franchises  »  Snap-on Tools  »  News
Snap-on Tools News
Judges highlighted Snap-on’s introduction of a revolutionary franchise package for the next generation, as well as its investment into infrastructure and technology which had propelled its franchisees’ businesses forwards during a period of economic uncertainty.

After being named the UK’s top automotive franchise and number two opportunity in the country overall for 2022, Snap-on Tools now has another award under its belt. The ‘HSBC Elite Franchise Exceptional Performance Award’ was presented to Snap-on Tools for the second consecutive year at a lavish ceremony at the Hilton London Kensington in March.

All 100 franchise brands that made the now prominent ‘Elite Franchise Top 100’ list (EF100) were eligible for the prestigious award. But judges highlighted Snap-on’s introduction of a revolutionary franchise package for the next generation, as well as its investment into infrastructure and technology which had propelled its franchisees’ businesses forwards during a period of economic uncertainty.

Andrew Brattesani, Head of UK Franchising at HSBC, said:
“This is only the second time that the Exceptional Performance Award has been presented – and the fact that it has been awarded to Snap-on on both occasions speaks volumes about the franchise. Throughout all the ongoing difficulties of the last 12 months, Snap-on has been especially impressive with its ability to pivot, grow and enhance all aspects of its entire franchise network and model. We were particularly struck by the decision to relocate franchisee training from the US to a dedicated, training facility in the UK and various innovations made which has allowed franchisees to spend less time travelling and more time with their customers. As well as designing creative solutions to never-before-seen problems, Snap-on Tools continued to look ahead and develop new facets of its franchise model to empower a new generation of franchise owners.” 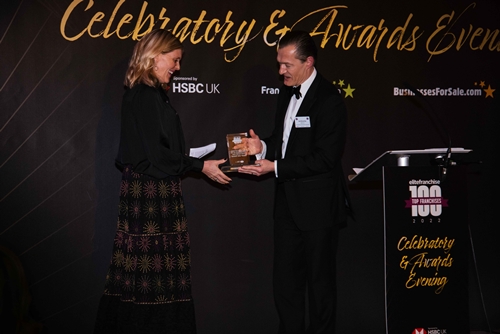 Established in 2017 in association with HSBC, the EF100 recognises the very best in UK franchising. It celebrates the sector’s brightest businesses and ranks them according to a broad range of criteria; from their financial performance and heritage to their contribution to the community and the way they embrace innovation. The franchise industry contributes over £17billion to the UK economy and more than 700,000 people are employed in franchising across the country. Despite a difficult economic climate, the last 12 months has seen franchise brands like Snap-on Tools survive and thrive thanks to their robust infrastructures and proven business models.

Lisa Law, Snap-on’s National Franchise Manager, said:
“We are absolutely delighted to have been presented with this award for a second time.  The last 18 months have shown us that overall our franchise family is unshakable. We innovate, we invest, we support – we are utterly dedicated to every franchisee. But none of that matters if those franchisees aren’t in love with their businesses. Ours are. And we’re so proud of how they have embraced so many challenges in these 18 months. They are a daily inspiration to us all. Thank you for the recognition – we’re excited for what the future holds.”

In a show of ongoing strength and commitment to customers, the brand launched 119 new products to market in 2021. Franchisees reaped the benefits as sales increased and a whopping 27 franchisees achieved over £10k sales every single week of 2021, earning them their place in the brand’s exclusive ‘£10k club’. A testament to both Snap-on’s and its franchisees’ ongoing commitment to the business.

Snap-on Named Number One Van-Franchise In The UK!

For the fourth consecutive year, Snap-on Tools has been named as the number one automotive franchise in the UK.

“I love owning my Snap-on franchise. I’ll never take it for granted that I’ve had the opportunity to join the most well-known tool brand in the world. I’ve built a business that has allowed me and my wife to enjoy our lives.Paul Bevington

I’ve always wanted two things; my own family and my own business. I’m incredibly proud that I’ve achieved both by the age of 32! My business is allowing me to build a future for my family whilst enjoying the sense of freedom and pride that comes with being your own boss. It’s win-win.David Hogg

The support you get managing your finances is second to none and, as I’d never owned my own business before, that was invaluable. They even help you fund the franchise – what more could you ask for?”Adam Trowler

Average franchisee sales of over £7k per week