Nicole Heard had worked as a teacher for 20 years in various roles before deciding that she would like a new challenge. She knew that the franchise model would give her the independence of being her own boss, but within a tried and tested and supportive structure. 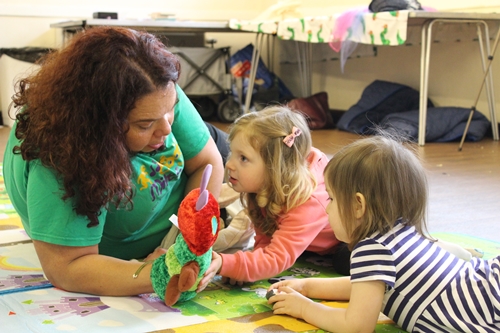 When she found that Boogie Mites was looking for licensees, Nicole was immediately interested as she had come across Boogie Mites through her work as a teacher and was aware of Boogie Mites’ high reputation as a provider of educational music programmes.

Nicole started off with 2 family music sessions and 2 nursery sessions.  From here she decided, in her own words, to “hit Portsmouth with a bang,” opening lots of family groups and getting  involved in local community events such as Fratton Family Festival, Party in the Park and Portsmouth Early Years conference.  As Nicole says, “I wanted Boogie Mites to be in the heart of the community.”

During her 2 years as a licensee Nicole has introduced two major innovations. The first of these is her Intergenerational Music Sessions where the youngest and oldest member of society mix to share music activities and socialise. The success of these sessions has brought acclaim from the Mayor of Portsmouth, Portsmouth MP Stephen Morgan and BBC Radio Solent as well as from many organisations working with older people.  Following independent research, Intergeneration Music Sessions now form an important component of the Boogie Mites offer.

Nicole’s long term aim is “for Boogie Mites Intergenerational music to be in every care home in Portsmouth.”

“I like Boogie Mites because it fits in to those areas of development, from listening skills, enhancing self esteem and confidence to supporting children with their phonics which is the foundation to reading and writing.Trish Kerr, Licensee Southampton

If you’re thinking of taking on a license of Boogie Mites, I would suggest, do it! It’s one of the best decisions I ever made, I smile every day...I just love it!Nicole Heard, Boogie Mites Licensee Portsmouth and Petersfield

The rewards are that it’s all down to you..so when it’s successful it’s down to what you put into it. And you get some brilliant feedback from parents and settings: we do make a difference.Pauline Nixon, Havant and Hayling Island

Tried and tested original songs loved by children AND adults