UK Franchises For Sale and Franchise Business Opportunities
All Franchise Categories  »  Oven Cleaning Franchises  »  Ovenu  »  Casestudies
Ovenu Case Study
Ritchie Landels has swapped the North Sea for the kitchen after launching his Ovenu business in Kirkcaldy. Ritchie sparked an interest in franchising and Ovenu, in particular, because of the volatility in the oil and gas industry.

A Kirkcaldy man has swapped the North Sea for the kitchen after launching an oven valeting business in Kirkcaldy.  Ritchie Landels is now the owner of Ovenu Kirkcaldy, having worked offshore for the last 13 years. 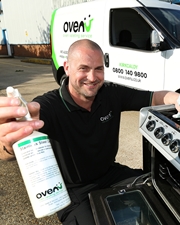 Ritchie, who is originally from Ashington, in North East England, recently moved to Kirkcaldy as he previously lived in Glenrothes after his parents relocated there when he was younger.

Ritchie sparked an interest in franchising and Ovenu, in particular, because of the volatility in the oil and gas industry.

Ritchie Landels said:
"I have always wanted to run my own business and with the instability in the oil and gas industry, it forced my hand and I decided to just go for it. I am now focussed on establishing the business with the eventual aim of creating job opportunities and expanding it from a one man operation to multiple sub-contractors.

Having researched the franchise market I came across Ovenu and after an initial meeting at its head office I was impressed and went from there. I have enjoyed my offshore career and now I am looking forward to meeting and building a rapport with my customers and serving Kirkcaldy, which is a fantastic and welcoming place."

Ovenu Kirkcaldy provides an environmentally-friendly oven valeting service to homes and businesses throughout the town and all surrounding areas.

Rik Hellewell, Managing Director and Founder of Ovenu, said:
"Ritchie possesses a real drive and determination to succeed and I am delighted that he has joined the Ovenu brand. He has big plans for the future of his business and I would like to wish him all the very best."

Ovenu is a franchise network made up of more than 100 businesses owned by men and women working throughout the UK.

The Ovenu valeting process involves dismantling key components of an oven such as the door, interior panels, fan and shelves and placing them into design-registered tank equipment, which uses safe, non-caustic products to clean the oven parts. The whole process takes around three to four hours and leaves the oven, hob and exterior in immaculate condition.

Find out more about the Ovenu franchise by clicking below

Jackie Meredith, a former market researcher with a zest for life and an appetite for adventure, is launching her oven valeting business in Codsall.

Dave Manning has swapped his 30 year career at a garden centre to start out in business as owner of Ovenu Bristol East.

Stephanie Horsfall has rolled up her sleeves to start out in business as an Ovenu franchise owner in Halifax.

Darren Hayter, the owner of Ovenu Ware, has realised his ambition to become his own boss.

Ovenu Yeovil is gearing up for continued growth after a successful 10 years in business.

Anna Mason, 45, from Yoxall, near Burton-on-Trent, chose Ovenu after looking at a variety of franchise opportunities.