Poole franchisees, Clive and Angela Coldwell have brought in over 100,000 every month since January.

IN JUST ten months, Dream Doors franchisees Clive and Angela Coldwell have generated well over £1million. The owners of the Poole franchise have brought in over £100,000 every month since January. They attribute their success to the power of the Dream Doors brand and the good reputation they have built up in their own area. 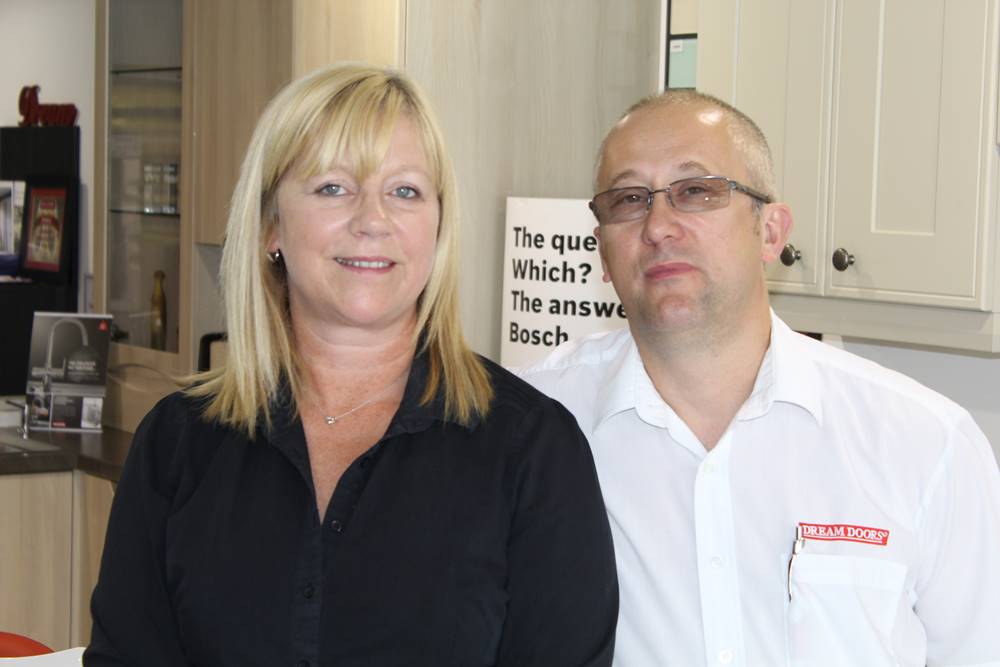 Angela said: “Now that we’ve been doing this for eight years, we’re much smarter at what we’re doing. We have our advertising channels in place, but to be honest we now generate a lot of business via recommendations and referrals.

We’ve got a great team of fitters who have been with us from day one and they’re really experienced at dealing with customers.”

He said: “It’s all about reputation and encouraging people to find us online and talk about what we’ve done. We get lots of: “You did my auntie’s best friend’s neighbour’s kitchen’ type of thing. But you can’t take anything away from the Dream Doors brand. And that brand awareness keeps on growing. In particular, our internet presence has grown significantly since we started.”

Clive and Angela both worked in large corporate organisations before deciding to pursue a franchising career. Clive said: “It was that opportunity to create a proper business - with franchising, it’s about the security you get. We could have set up our own kitchen showroom, but we didn’t have that knowledge or expertise. We didn’t know what to put in the showroom and what to fill it with. When you buy into a franchise, you buy into that knowledge and expertise.”

Clive added: “We looked at a couple of different things and different companies, but Dream Doors struck us as one that we could grow the most with and achieve the most with. Most franchises are about being a one-man band with a van – that’s not what we wanted. We wanted to grow more than that.”

Clive and Angela certainly have grown, with sales of more than £8million since their launch.

Find out more about the Dream Doors Franchise and how you can become their next successful franchisee. Click below now!

Franchisee Neil Fisher followed in the footsteps of a childhood friend to launch his own Dream Doors trading territory.

Simon Herbert took the leap into running his own business two years ago and opened Dream Doors Gloucester.

Ramin Razaq relocated from Belarus to open a profitable kitchen makeover showroom in the UK with his wife Wida.

After more than a decade of trading, Dream Doors franchisees Mike and Elaine Hurley are still enjoying their work and making great money.

Chris Nowell joined Dream Doors in early 2019 and is now running a kitchen showroom in Telford.

Vishal Amin has found a way to balance spending time with his growing family and earning a great take home salary with Dream Doors.

Finding a flourishing business model at the National Franchise Exhibition

Paul Brown describes how he discovered a ‘flourishing’ business model at Birmingham’s NEC.

Ex-service engineer Mick Appleton is indulging his love of interior design by opening a kitchen showroom.

It took Wilson Craig just 31 days to formally open his kitchen showroom in his hometown of Prestwick.

Colin Lynch was looking for a change of career and knew franchising for the UK’s #1 kitchen makeover company was the way forward.

Chis Robottom has rallied from a Brexit-fuelled redundancy by taking on his own kitchen makeover showroom franchise.

Family Working Together For Dream Doors

Changing his career direction has given Wilson Craig the chance to work alongside his family.

Jeremy Taylor is adapting his knowledge of selling healthcare products to selling kitchen makeovers as a Dream Doors franchisee.

David Parr was looking for a career change that offered greater earning potential.

Jaspal and Sarbjeet Hayle jumped at the chance to change career direction and take over a Dream Doors franchise.

David Ward OBE has swapped conflict zones in Europe and the Middle East for a Dream Doors kitchen showroom in the West Country.

Gary and Hayley Ashe relocated to Britain to tap into its ‘mature’ franchising market.

Former sales manager Manbir Takhar was looking for a new work opportunity when he joined Dream Doors in 2015.

Sean and Katie Hebdon have built a successful, family-run business that delivers the lifestyle they had always craved.

For Jon O’Hara opening the first Dream Doors showroom in Northern Ireland was also about finding the working freedom he was seeking.

Two childhood friends, Andy Earnshaw and Robert Wood, are topping up their pension pots by launching a Dream Doors franchise.

A seven year conversation with Dream Doors has finally led to Eddie Shiels coming on board and taking on a showroom.

Malcolm and Jon Newnham set themselves a sales target of £300k for their first year and achieved that figure in just six months.

Taking on a Dream Doors franchise allowed ex-teacher Matt Jones to move back to his favourite part of the country.

The James family has worked together to generate over £1million in annual sales from their Dream Doors showroom in Stoke-on-Trent.

Ex-banker Jerry Innesbeer took back control of his working life by taking on a Dream Doors franchise after being made redundant.

Samiul Islam and Abdul Muktadir have surpassed their income targets in their first 18 months of running a Dream Doors franchise.

After training to be a butcher in his youth, Kevin later became a health and safety officer for a multi-national corporation, inspecting factories around the world. But, by his own admission, a love of international travel can ‘wear off’

Husband and Wife Join Dream Doors to Enhance their Business

Mark and Janet Warr approached Dream Doors to seek the opportunity and method they needed to grow their business.

Graham Phipps joined Dreams Doors as he wanted to change his career and has now opened a new showroom in Solihull .

Dream Doors franchisees Richard Marshall and Jamie-Louise Brewer generated over £94,000 in their first month of trade.

Joining Dream Doors has been a 'whirlwind' for David and Kate Howle of Worcester.

Craig Allen was a disgruntled employee that chose franchising to find freedom, profit and security with Dream Doors.

Half-a-Million-Pound Businesses- With No Prior Experience!

How people with no prior experience are building half-a-million-pound businesses with Dream Doors.

Mark and Rachael say that they have never felt more at home whilst working as Dream Doors Franchisees.

Lavine decided to open his own Dream Doors franchise and tells us what first attracted him to the proposition.

Matt Jones, the new owner of Dream Doors Truro, worked as a design technology teacher for 12 years before taking on a franchise.

Dream Doors tells us how Barry Payne recovered from a career ending fall to turn around an ailing Dream Doors business.

The training and support has been fantastic and has really reinforced the fact that we made the right decision. The initial training was really helpful and there have been plenty of visits from the Franchise Support Manager to keep us on the right path.Helen Mahon

Everything about the franchise works as it is written in the manual and, in your early days, this is important while you learn the business.Paul Reeder

If you want to work for yourself and have more flexibility, I would recommend a Dream Doors franchise. Also it’s good to know that you can run your own business, but still have the back up of a national company.Matt Jones

By replacing the doors, and usually the work-surfaces and sink, a kitchen can be transformed in 2 days

The kitchen industry is booming and, as an alternative to standard kitchen companies, Dream Doors offer our customers a solution that saves time, money and hassle